This is the documentation of the old free version 0.666 (devils tools). You may be looking for the current version 0.81 (era:hip.py tools).

You need at least two objects selected. Where the active object will be the target object and all other selected ones gonna be source objects. 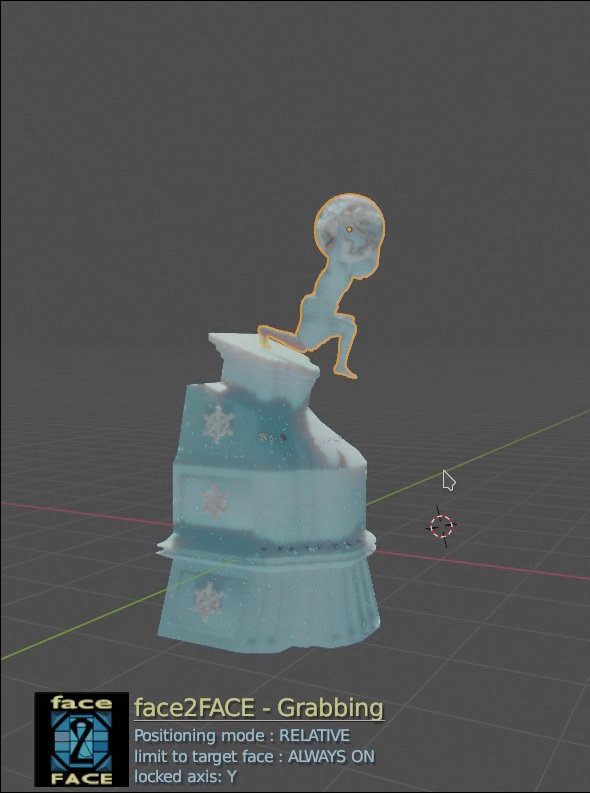 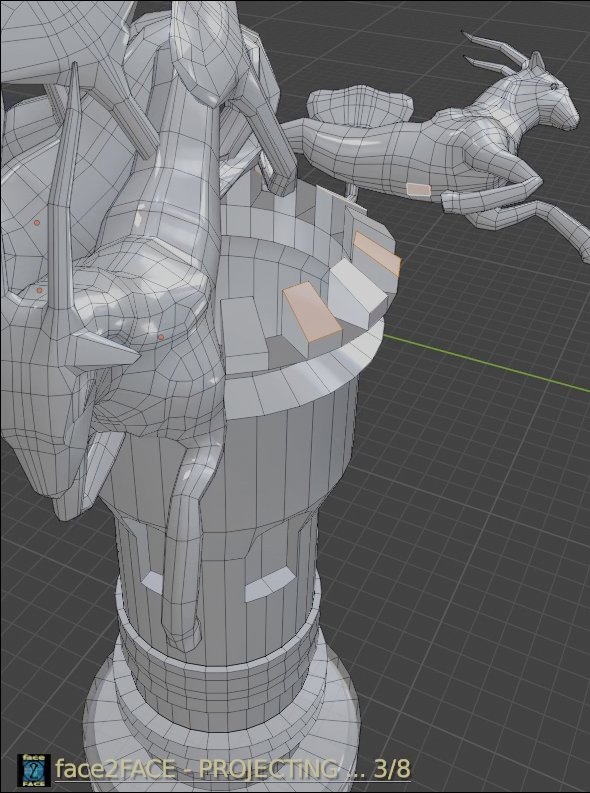 A source objects needs exactly one face to be selected. The target face needs at least one face selected. When everything is selected you can press the shortcut to start the addons modal (which by default is F7 , but you can change it in the addon section of prefences).

The source objects (normaly copys of it) where then projected in a way that their selected face will be placed face to face onto each of the target faces.

This addon works as an modal operator, which means that things can done in different ways and orders. An can be altered, changed and tweaked during excecution. (By the way it is also possible to pick your work up again and alter it after you aplied your projections) This is done inside the different modal states. After hitting your shortcut to start the face2FACE addon, you always get into the ...

From here you can reach the all the different transform states:

Or do some operations which will act on all transformations at once (All other states also have this option, but for the corresponding transform only):

Or use the selection possibilities which were available globally in each of the states.

You can also alter the view in each state based on your personal settings as long as they did not conflict with the shortcuts of the modal operator. This is the case for example if you have, for some cumbersome reason, set your view pan to the S key. Then the modal will consume the event and your view settings wont work anymore.

After you have tweaked the projection inside the different states in a way you like, you can apply them and leave the modal operaror. Or abort what you have done and return to the state before you started:

This is the state in which you can change the position of the projected objects (or in other words the offset to their projection points on the target faces). It can be done by just moving the mouse around. Than the active object will be placed on the XY plane in account to the view. And all other selected objects will then placed depending on the mode respectively on their target face plane.

RELATIVE positioning takes the size of the target faces into account. While in absolute positioning the offset of the other selected objects is exactly the same as the active manipulated object. TODO ADD EXAMPLE PICS

This state as the name suggest is for altering the scale of the projected objects. Again it can be achieved by moving the mouse. Moving to the right increases the scale while moving to the left decreases.

And last but not least the state for altering the rotation of the projected objects. Moving the mouse to the right rotates in clockwise direction and moving to the left the other way round.

Selections of the projected objects can be done in various ways. For example with an imitated box, circle and single selection similar to the normal blender ones. But also by object type, target face type or for example objects on the same faceloop. Some shortcuts here depend on wether you have RIGHT CLICK SELECT or LEFT CLICK SELECT enabled. So we will write in the following about SELECTIVE MOUSE BUTTON and the CANCELING MOUSE BUTTON, which means depending on your choice RIGHT MOUSE BUTTON or LEFT MOUSE BUTTON.

Select objects based on their target face type (which is simply the amount of vertices. Tris, quads, n-gons).

This is the possibility to select objects based on their type (which means they share the same source object).

This is the possibility to select objects which share the same faceloop. Its only possible when the target faces are quads.

Instead of the common behaviour in blender you have to press also alt for selecting a single object. Its because just the SELECTIVE MOUSE BUTTON is already used for applying or canceling the operations of the state.

reset transforms into its original state

The transform will be reseted to its state at the start of the modal operator right after their projections. Deleting all changes ever made. If you want just to undo the currently changes done in a specific transform state like grab, scale or rotate just leave the state with RIGHT MOUSE BUTTONor ESCAPE.

With the help of the settings you can change the face2FACE addon to fit your needs. We have global settings which can be found in the blender preferences. They will count for each new created session. And there are local settings which can be found in the 3D View N-Panel under the f2F addons Tab. They will only be saved in the specific file and used when file is loaded with such altered settings.

Settings altered in this section are changing the face2Face projection behaviour.

Settings which influences the created projections.

Settings which will determ how to delete projections.

This can be usefull for for example if you have buildings and want to project them randomly on a square plane. you can restrict the variation to 90 degree. And the buildings will stick straigth to the streets. TODO: insert example pics

Settings which only alter the user experience.

Here you can set the size of the fixed angles at which the projected objects can be rotated via shortcut. The shortcuts can used together, which will add up the angles. For example:

The color theme should be self explainable. Just pick your favorite colors.